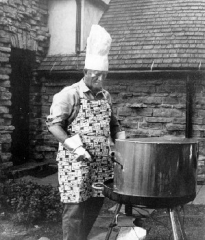 Three-day weekends are officially good. Managed to mow the lawn, do some long-waiting-to-be-done “fix it” stuff around the house, and attend three barbecues. Back to work tomorrow, not something I’m looking forward to at all. I keep thinking about my weeks upon weeks of state-funded “bonding leave” coming up in December, and the blissful days spent not going into the office. Yeah, I’m way ready for that. Mostly music; deal.

Oh, I did update Keaton’s gallery Monday, check it out (and yes, I added this sentence late, post-publishing).

I am chomping at the bit to see the movie Jesus Camp ever since catching the trailer on YouTube and reading David Byrne’s blog entry on his thoughts after seeing a screening. I have to see this movie, it looks ultimately compelling. Hopefully, it’ll make the rounds at one of the local artsy joints here in town.

Seriously, all the hubbub about the Pitchfork leak of Joanna Newsom’s new album made me positively itchy to hear the thing. The indie crowd is in a state of multiple-orgasm over it, leaving me perplexed. See, I couldn’t for the life of me get into her previously lauded effort, The Milk Eyed Mender. I’ll say up front that I’m not a huge fan of this whole “psych folk” or “freak folk” movement that’s been so hot over the past years – the sound is just a bit too “weak” for me. Anyway, I used my leak-locating superpowers and tracked down a YSI link for the album (which was just a rip of the “oops’d” shared PF directory).

What do I think about this album? What the hell? The message boards of the thick-rimmed set are lighting up, already proclaiming this five-track effort “album of the year.” Seriously? I’ll admit it’s interesting, the lyrics are somewhat engaging and there’s no denying an abundance of songwriting talent here, but it’s about as unapproachable to me as Natalie Portman – I’ll never get it. With lush orchestrated background approximating a Disney score and Newsom’s fragile annoying voice warbling out in a worse-than-Bjork timbre, I just don’t get it. Best album of the year? You’ve got to be effing kidding me. You guys can have your gay-ass freak folk, or whatever you call it. Give me something like The Figurines or Midlake or The Islands or The Decemberists… you can have this pansy crap.

By the way, I’m gonna get like tons more chicks than you when I’m blasting Wolfmother from my open car windows in response to your dainty Newsom “Monkey and Bear” harpischord balladry. That is, unless you want to date the Lilith Fair. Personally, I’d rather date Ozzfest.