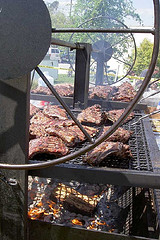 Sunday night, my folks were in town for the weekend.

When I was a kid, I can remember going with my parents and brother up to my grandparents’ house in Southern California. Being not far removed from Santa Maria, my grandfather was a great fan of what’s known in Southern California as Santa Maria style barbecue. I can remember watching my grandfather cook trip-tip, burgers, and hot dogs for the kids over split red oak on a brick barbecue (or “grill,” for you crackers). The barbecue was a large brick installation with a simple grate that could be raised and lowered via a chain pulley system – really just a brick and mortar housing for cooking over an open woodfire. This chain-and-grate adjustable-height grill is typical to Santa Maria style barbecue, you’ll even find this style grill in some public parks in and around Santa Maria itself. And on the weekend you’ll find folks cooking tri-tip and serving it with its must-accompany side item, Lompoc pinquito beans.

An aside: For my entire Southern Californian childhood, I used the term “barbecue” to refer to the actual act of cooking meat over wood. When I moved to Florida around age twelve, however, I learned quickly that Southern folk consider that very same act of cooking to be “grilling,” and it’s only referred to as “barbecuing” if there’s actually barbecue sauce involved in the cooking. Since Santa Maria style barbecue doesn’t involve barbecue sauce at all (you’re apt to get shot by a vaquero if you put anything other than salt, pepper, and garlic on a Santa Maria style tri-tip), the two coasts have incongruous definitions. Now then, back to the point of this whole thing.

Semantics aside, though, I’ve long desired to grill like my grandfather did. Tri-tip over a dead simple woodfire and, preferably, on a barbecue built by my own hands. It was this desire that had me eyeballing potential brick barbecue installation spots in the backyard this weekend, and scouring the net for plans. I found lots of plans, some that looked perfect for the backyard. However, considering the flirtatious nature of my love for the next “project,” I decided maybe I’d be better off not adding another unfinished masterpiece to the list. So, I instead began the search for a pre-made unit that I could buy. Slowly, I uncovered a few sites – finally ending at a place called the Santa Maria BBQ Outfitters, which specializes in Santa Maria (also sometimes referred to as San Luis, short for San Luis Obispo) style “pit” grills. These are just like I remember, crank-operated grates suspended above a pit for a woodfire. Sharaun has made some small protest, but I’ve pretty much decided this guy will be in our backyard within the month.

Once I get her set up, and find a local supplier of red oak – I want to throw an old style barbecue, reminiscent of the kind my grandfather threw for his family. Heck, I’ll even complete the picture with a bloody mary in-hand.

One Reply to “salt, pepper & memories”