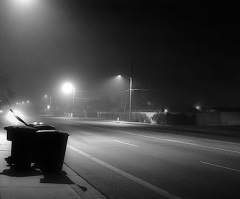 Sharaun’s at the gym, I’m here listening to King Crimson’s In the Wake of Poseidon (not the album, well, yeah, the album… but I mean the title track in particular). What a great song. Reminds me of some of the more haunting tunes from ELP’s debut, or even some Threshold era Moody Blues. I’d like to put this song in the movie I’m always talking about putting songs in.

Keaton’s out of sorts, I’ve rocked her to sleep and put her down now three times, each time to have her wake up crying just minutes later. Frustrating, especially since she usually goes down so easily. I think, though, that this last time was the one – she’s woke up and fussed but I let her power through it and she seems to be out now. Not sure what her deal was tonight, Sharaun said she napped well today.

There now, much better: washed the dishes, brought in the trash from the curb, and wiped my ass for good measure (you can never be too prepared).