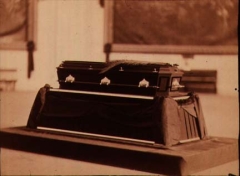 Thursday night; this week flew. Sharaun’s at the gym (which I pronounce “gime,” as a play on how foreign the word is to me), and I just put Keaton down. I feel like I’ve become an expert at putting Keaton down. I have the touch, the knack, what she needs. I know exactly how long to hold her before she’ll be able to handle the hold-bed transition, know how tightly to cling to her arms and legs while they do her pre-sleep flail, and am an expert at calming her down. This is an immense source of pride for me, you have to understand that. I daresay that I’m actually better at getting down than her mom, and that’s a bold assertion. But that’s me. Boldly sitting here on the couch, the iPod shuffling up the Sundays (I think to mock my boldness), and watching that precious little girl sleeping soundly in her crib. Bold, I say.

I’m turning thirty this year, and I’ve never been to a funeral. I look at this as something to be joyful about. Sure, I’ve had people around me die – but, despite some being blood relatives, I wouldn’t consider myself having had been truly “close” to those that are now gone. That, in and of itself, is kind of sad to even think about. Watching family members pass away having never developed much beyond an acquaintance-level relationship with them. I do take some comfort, though, in the fact that the distance between me and those relatives no longer here was geography-driven – and I didn’t have much of a practical chance at developing those bonds. Lament over lost time aside, the fact still stands that I’ve never once attended a funeral – be it the funeral of a relative, friend, or acquaintance.

I bring the anomaly up because, as I write this, I’m sitting at home on an “extended” lunch break babysitting – while Sharaun attends a funeral. No one close (as if that callous statement somehow makes it better). The woman was a “yard duty” at her school, someone she interacted with quite often. A lot of the faculty and staff turned out, and Sharaun wanted to go pay her respects.

I’m lucky, you know. Someday I will have to go to a funeral, like it or not.

As I grow older, I find that the number of things which I allow to affect me emotionally – specifically those which impact me sufficiently to bring tears or sniffles – has grown. I think having a child has a lot to do with this as well, but I noticed the increase even before crossing that life threshold. Yeah… prior to Keaton, and before my old age, I can remember crying as a child, and at the end of Schindler’s List (y’know, the part with the rocks on the grave?), and that’s about it. All those times I “cried” so cheated-on girlfriends would take me back it was just lab-tears, whipped up for the moment. But now… I fear I’ve turned soft. Know how I know? I saw this picture online the other day, and, without even reading the tearjerking accompanying article, I nearly lost it. That is a human being.

Had my final Lasik follow-up last week, my eyes are doing great and seem to have settled out at 20/15. The nighttime halos that the doctor said I may have, and that I did indeed have, are now reduced so much that I don’t notice them but are supposed to go away completely within three months post-op. The only side-effect that’s still lingering is the extra dryness in my eyes. It’s gotten better than before, but I still carry around drops and usually use them a few times a day. That’s supposed to go away for the “vast majority” of patients within 6mos at the most, I’m just waiting. Again, I think this is some of the best money I’ve ever spent. Restoring my vision to something I can wake up to… that’s just awesome.