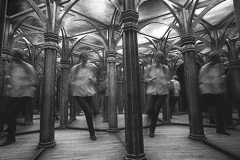 Last night I had a dream that I was trapped in a funhouse hall of mirrors. It was just like all the Scooby Doo and USA Up All Night Horror movies: dim lighting and an endless maze of my own reflection with an evil voice calling out to me from somewhere unseen. Sharaun woke me up because I was making one of those breathy dream-screams in real life (I do that sometimes, I’m a chatty sleeper). What the heck does a dream like that mean?
Noticed that Bush used his presidential veto for the first time this week to shoot down additional funding for stem cell research. I’ll state right up front that I think this is stupid, but rather than try and construct paragraph supporting my opinion I’ll just defer to this outstanding reader comment on the Newsvine coverage of the happening:

Here’s how I view whether an embryo should be considered such a valid life or not:

You are a firefighter, called to the scene of a horrific fire. The fire is in a local in vitro clinic – you put on your mask and rush inside. In the smoke and warmth, you hear a girl crying. You find her, standing next to a refrigerator holding hundreds of frozen embryos. You can only carry one. Which do you take?

The girl of course.

So does this mean that you’ve failed as a firefighter? You have forsaken the lives of potentially hundreds of children for the life of one child.

But when it comes to research, which already has proven more than helpful, suddenly the tables turn, and the embryos at stake are more important than the thousands threatened each year by cancer, Alzheimer’s, spine injuries, and the multitude of other things that stem cell research is working for.

Yeah, and I’ll be right there with you calling BS too.


Found this editorial take on the current Israel/Lebanon/Hezbollah thing I’ve been trying to follow pretty interesting. Although it clearly casts Israel as the bigger aggressor, it actually helped me (make sure and read the comments to for some good counter arguments that help round out the thought for those not passionate enough to have picked sides).
Wanna make your brain hurt? Head over to this site and watch the cool Flash animation that explains how to conceptualize a 4th, 5th, 6th, and on up through 10th dimension. Just click on on the zero at the bottom of the twirly numbers on the right of the page. I’m this close to ordering the book, as the Flash teaser is interesting as crap.

6 Replies to “you’ve failed as a firefighter”