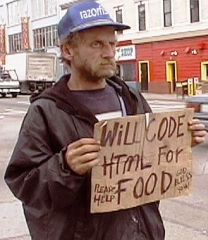 Entry today is heavy with the stuff that drives away readership, but so it goes. Rode my bike to work today for the first time in a long while. The ride in was great: iPod on, weather still morning-cool, and mostly downhill; the ride home was awful: hot as hell, no water, and the opposite of downhill.

The power of suggestion is massive, we all know that. For me though, the power of suggestion from those I respect is even moreso. For instance, while in Florida, my longtime buddy Kyle and I discussed new music, as we’ve been musical partners going waaaay back. He ended up mentioning the new Destroyer album, which had been sitting, relatively unplayed since my first impression, on my iPod for weeks. He hadn’t actually heard the album himself, but a mutual friend had compared it to Bowie (quite a germane comparison, by the way) and just hearing Kyle’s interests piqued got my itching to spin the album again and reevaluate it. I put it on as I went to sleep that night, despite Sharaun’s permanently lodged complaint about headphones in bed (I’m supposed to be “paying attention” to her as we fall asleep). Anyway, I’ve got to admit – either I’ve been lemming’d into a fondness for the album, or I misjudged it to begin with. This album is good, and getting better the more I hear it.

Folks, it was just a month and a half ago that I blogged about the incredible increase in comment spam this site was seeing. That’s six weeks ago, for the months-to-weeks conversion challenged. Six weeks, and my comment spam count is now sitting above 70,000. Doing a little arithmetic, that means I got 40,000+ pieces of spam comments in that time – amortize that as if they were coming in at a regular rate and you end up with a figure of ~6,000 spams per week, or ~1,000 per day (rough math). That’s insane… right? I guess when your blog has been around for nearly three years (w00t!) and you’ve got a butt-ton of entries you’re just a spam-comment honeypot and it’s to be expected. Thank God for Akismet.

Speaking of Akismet – I’ve long dreamed of adapting the Akismet API for use with my spam-ravaged Coppermine photo gallery. And, after an hour or so of tinkering – I actually did modify Coppermine to work with Akismet, using Bret Kuhns’ PHP4 library. Right now, the hack is incredibly rough – but basically doesn’t allow comments which are suspected as spam by the Akismet screening. The “disallowance” is a horridly ungraceful Coppermine “die” error, but it works for now. The only guidance I give the Akismet server at this point is the comment author and text, which is just scratching the surface of spam-evaluating criterion which may be passed. Also, I did not bother to modify the Coppermine database to enable tagging comments as spam, nor did I implement a way to submit false positives back to Akismet for training. Since both of these things are essential functionality for “conscientious” Akismet usage, I feel like I should work more to make this thing better. Eventually, I’d like to make it into a full-fledged Coppermine plugin – but for now it’s a complete hack (I even waxed about my grand intentions on the Coppermine boards).

The proof is in the pudding though, and I’ll have to monitor things for a week to see if the hack actually stops spam (although I don’t see how it won’t). The things I do for fun…

Oh, and a message to all the hecklers – yesterday’s post-accompanying picture of Keaton was chosen specifically for its… beauty. I’ll have you all know she is still, and will always, = cute.

4 Replies to “the opposite of downhill”