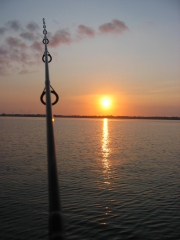 Been a week in Florida now and my thoughts of returning to work next Wednesday are slowly creeping into my head. I don’t want to go back to work; wouldn’t mind staying here another several weeks actually. We’ve been having a good time, once again doing the packed-schedule vacation that I both love and hate. Love it for the vacation part, sorta hate the scheduled slots of visitation and obligatory visits – sometimes you just want to do nothing. But, we got to see nearly all the friends and relatives we wanted to, and even had some decent down time. Whatever, I hate writing these show-and-tell bits. Let’s move on.

Maybe we’ll do some one-liners.

That’s enough for today, first Monday I’ve missed a gallery update for Keaton in a long while. Look for something tomorrow. Goodnight.