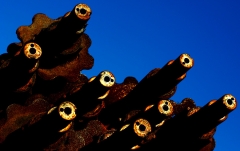 Spent some time early Wednesday morning reading over the various “half” best-of lists on various music ‘zines and blogs. Queued up a bit of the more intriguing sounding stuff and now have a folder of “prospects” sitting on my desktop just waiting for me to listen to it. I’m hoping there’ll be a few gems in there. I think I’ll fire them up tonight at bedtime. (These are the things I look forward to.)

My dad called me today, asked me sarcastically “David, when are you gonna quit smoking?” Obviously, he’d read my thick-headed lament over another bout of social smoking gone wrong. “I thought you had a college degree,” he chided, “Thought you were smarter than that.” Yeah… I should be. I don’t smoke, I just sometimes get caught up in the moment when out throwing darts and flipping beer mats. I had promised myself that, when Keaton came, I wouldn’t “indulge” anymore… and I’m still working on that. Thing is, in reality, even a cigarette or two once a month can likely eff up my lungs – so it really does make sense to stop joking about it like it’s an accident every time. Maybe I’ll make a half-year resolution to end the social smoking tout de suite.

I remember when my family moved to Florida, I had just completed the 5th grade in California. Someone had told my mom that there were no trees in Florida. I had visions of some flat, barren beach landscape – void of green. As soon as we got on the ground, I knew whoever my mom had spoken to must’ve visited a different Florida. Florida’s thick with growth; like a green jungle. Trees crowd together along the roadside, some clad with vines and what the Floridians call “airplants.” There was more green in Florida than I’d ever seen in the brown summers of California. Driving around now, I can’t imagine a place this wet being anything but lush. The air is so heavy with water the sun-bleached fenceboards have green blooms on them – sustained, I have to assume, by the humidity alone.

I think three paragraphs is good for vacation, no? Until tomorrow then.

One Reply to “sustained, i have to assume”