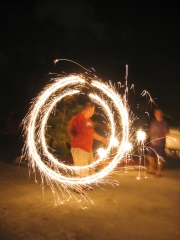 Lazy Tuesday spent July 4th’ing it: grilling bulk-purchased burgers and hot dogs, walking down to the river for a front row seat to the shuttle launch, taking a dip in the 80° pool, and otherwise sitting around watching television. American to the core; I even drank a Budweiser in honor of Florida. It was cool seeing a shuttle launch, I’d forgotten how neat it is to watch. I had planned to take Keaton down to the river to watch the launch, having artistic visions of a picture with her looking skyward and the smoke trail winding upward in the background. Alas, she was down for a nap when the countdown hit four minutes and it was time to start walking.

At night we walked back down to the river (it’s just down the road here) to watch the fireworks show. Keaton slept through the entire thing, clutched close to mom’s chest in her sling. It was a great time, felt very “family” sitting there with my wife, daughter, and inlaws. The only thing that could’ve made it better would’ve been if I’d not knelt in a fire ant hill to snap some pictures of the festivities. After the finale, we headed back to the house to play around with some of those supersized sparklers, which resulted in some really cool pictures that I’ll post later.