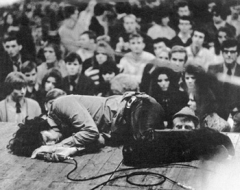 Good Tuesday evening folks, glad to be with you again. Guess what? My daughter rolled over for the first time yesterday. You know me, I’m hard at work on a cheesy video celebrating the event.

Recently, I scanned through my iPod looking for ways to condense down the content and make room for new stuff. Not that it’s completely overflowing, but I’m just not a fan of excess. Anyway, I decided that, rather than having the entire remastered Doors discography, I could live with just a hand-assembled collection of my favorite Door songs (because, honestly, who can listen to “Horse Latitudes” all the way through anyway?). So, I hand-picked some songs and put together “Dave’s Picks,” a Doors greatest hits collection tailor made for me. I was so proud of myself and the 30 megs I saved, that I played the new compilation on the way to work this morning. And y’know what, I discovered that I’ve been listening to the Wal Mart version of the Doors my entire life. used to only the versions on the Columbia House version of the double disc Doors greatest hits set I was weaned on, and in fact not even aware there were other versions, how shocked do you think I was when I heard Jim Morrison say:

Instead of the (now obviously truncated) sounding:

I can’t believe I never noticed the odd gaps in the lyrics, it’s so “… she ain’t messin’ with no broke-broke” sounding. And, all that Oedipal innuendo I always had to imagine at the end of “The End” is just out there in all it’s incestuous glory, as Mr. Mojo Risin’ follows up the suggestive “Mother, I want to… ooooohaaauurgh… night loooong!” line by breaking into a sort of F-word scat. Letting loose a bouncy chorus of “Fuck-a-fuck, fuck me baby, fuck, fuck…” Man, I’m ashamed to say that I didn’t know these songs in their full socially defiant beauty until this, the year of our Lord, two-thousand naught-six. Shame on me, shame shame.

Know what though, I decided to look it up – and it turns out the unedited version of these songs never even saw the light of day until six years ago when they were released on the 2000 remasters (the very albums from which I culled my compilation). So, I don’t feel so bad – these songs existed only in butchered form since they were released on wax way back in ’67. Whew. No shame on me, no shame no shame.

On our honeymoon, Sharaun and I saw a young girl get hit by a car. Maybe 15 or 16 years old, the girl was walking along the side of the road with her family. Sharaun and I were on the other side of the road riding our rented bicycles from one side of the island to the other. We had just passed the family as they walked opposite us when I heard the car skid. Next came a loud sound of impact, and I stopped my bike and turned my head just in time to see the girl’s body come over the car. She looked like a ragdoll in the air, every muscle limp as she tumbled above the trunk. She hit the ground in a violent collapse, her head the last thing to stop moving, neck offering no resistance as it landed on the hard packed dirt with a disgusting hollow sound. The car was already stopped, maybe 10ft in front of where the girl’s body now lay – motionless. I could see the smashed windshield through the rear window.

I’d never seen anything like that before, and I feared that I’d just watched a girl die in front of me. Sharaun and I were somewhat in shock, our eyes riveted to the scene while others rushed to dial 911 on cellphones and began to cross the street. The girl’s family was in a frenzy, one of them, who I took to her sister, was wailing. She repeated it over and over again in an agonizing cry as she bent over the girl, I’ll never forget that island accent calling out that name. The driver of the vehicle has since stepped out and was in a state of breakdown herself. A young girl, likely only a few years older than the girl now laying in the dirt, she was crying violently and looked positively lost for what to do. Then, not 20 seconds after the whole thing transpired, the young girl on the ground began to stir. Appearing dazed at first, she then became quite alert and even got to her feet. After that impact, I could hardly believe it.

Bystanders urged the girl to sit back down, not to move – but she and her family were stubbornly already trying to move on, the girl actually up and moving away from the scene. I remember thinking it was so odd, and that this young woman must have internal injuries. As we began to hear the approaching wail of sirens, we decided to move on. I still remember the terrible feeling I had in my gut as the crash played out in my mind during the remainder of the ride. I kept wondering just how hurt that girl was, despite her seemingly miraculous recovery. Kept imagining how her life may have changed that day, or may have not. Scary, sad, sickening, and fascinating.

I remember putting the Band of Horses album everyone’s talking about on my iPod way yonder back, maybe even two months ago. I must have decided, back then, that I didn’t really dig the album – because it’s since been removed from the iPod and my music library proper. I don’t know what was wrong with me, because this album is truly good. So good, in fact, that it’s now back on the iPod and in heavy rotation. Stupid me for getting rid of it in the first place.

Oh! Oh! Oh! Remember just the other day when I was pining for some scrap of news about the Arcade Fire’s sophomore album? Look! It’s like the Fire read my blog and are talking just to me! Fifteen songs! A pipe organ! C’mon Arcade Fire, pleeeease do it again, pleeease!

And, to finish off this music news hat-trick – I noticed that Cokemachineglow ripped off my Best of 2006.5 idea with their own half-year best of, the major difference being theirs has better written metaphors and more germane imagery. Also, they picked some albums that I personally feel are crap. I just can’t get into that Danielson LP, I hate everything the Fiery Furnaces ever put on wax, and that Love is All record was an overrated piece of trash. I do, however, agree with them on the albums that we chose in common – and I’m busily “perusing” the ones I hadn’t heard of.