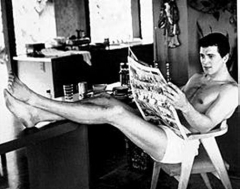 Today blew. Got horribly lost on the way to my 2nd Lasik consultation/evaluation – making me irreparably, showing up after the doctor had already given up on me. This means that I had to push out my 2nd evaluation, the one I was planning to use as a bargaining chip, until next week. And, because I have no basis for price-matching either surgeon down until I’ve had the other evaluation – I had to reschedule the surgery I booked for this Friday. Bummer… but I figure I can wait another week. You shoulda seen me though, lost in some remote part of town, furious at myself and stressing at 150% like I always do when I’m late for something… I had a headache in an instant. I couldn’t even enjoy the windows-down drive in our excellent 80 degree sunny temps. Woe is me… my life is so tough.

Biding my time while on the can the other day, I made it through another issue of Maxim. Not done with the restroom, I had no choice but to also begin reading the ads at the back. That’s when I came upon the ubiquitous back-of-a-mens-mag penis pill pitch. In a full-page spread peppered with bold, red block-text and lots of suggestive pictures of couple in various states of undress – a company was selling a “pill for male enlargement.” Standard enough, I figured. Heck, 50% of the comment spam this blog gets is for penis enlargement – so it must be a booming business. After all, I suppose there are some men with 11″ dongs who’d want just that little bit more… in case they ever bed a porn star or something. I found some of the ad pretty good, thought I’d share it here – although it’s not graoundbreaking comedy by a long shot… these ads are written to be made fun of. So, you can say I took the easy way out by picking an easy target for jokes, so be it. Some of the claims made in the very wordy pitch:

A longer and thicker penis even when you are not hard. Because there is more blood flow, your penis “hangs” larger all day.

I dunno why they put “hangs” in quotes, perhaps to add emphasis to the nature of the verb “hanging,” such that images of gravity pulling downward on an immense weight come to mind.

Just imagine when your sex partner sees how thick and long and hard you are. Men will gasp with envy the first time they see the new you in a locker room, shower or gym.

As a man, I resent this. The notion that I would “gasp” at another man’s penis is an insult to me. Unless of course, that man’s penis was 4ft long and shouting racial slurs at a funeral. Actually… it really wouldn’t even have to be a penis for me to gasp in that case – shouting racial slurs at a funeral is just plain-out cause for gasping… I’m just trying to keep this related to the penis bit.

You will feel in total command because now any possibility of going soft, and premature ejaculation will be eliminated with your new rock hard much larger penis.

I’ve always wanted to feel “in total command.” In fact – if I’m gonna be in total command, I’m going to have to ask that my sex partner salute me. You know, the way soldiers salute the president? I’m also going to need some medals and a hat that makes me look “in charge” of shit. I want to walk into the bedroom, rock hard penis leading the way a full 15″ ahead of me, sex-medals pinned to the flesh of my bare chest, and have my buck-naked sex partner snap to attention on the bed and salute me. And I want a crisp salute! None of that limp-wristed crap or there’ll be no rock hard penis tonight.

We also included some of the same type of herbs found in Polynesia where the men of the Mangaian tribe have sex on the average of three times a night, every night. While this is not what you may desire, it is nice to know that your sexual performance can improve substantially.

“While this is not what I may desire?” I’ll say. Have you seen any Mangaian women? Those skanky she-males are so hard up for mansword they’d bone me three times a night. No thanks, buddy, you can slay Mangaian women thrice nightly if it’s your cup of tea – I’ll settle for someone who’s hookworm-free once or twice a week. They do it with monkeys too, you know… those herbs don’t discriminate.

Because you are longer you penetrate more sensitive areas of the woman.

I’m hoping for her back teeth. Those mofos can be quite sensitive for some. They’ve even got special toothpaste for women who’s back teeth my new penis will batter during sex. Sensodyne: “For when your teeth hurt because his rock hard penis pounds them during the three (or more) bouts of freaky Mangaian sex you have every night.”

Well, that’s it for me. Canned content, if you must know… because I needed to hit the sack early (midnight) to wake up around ~4am and head to Oregon, again. The last of the travel, mehopes. Goodnight friends and lovers.