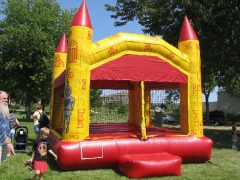 Hung over?! Are you serious? I thought that didn’t happen to me; steel constitution and all.

German Dopplebock, something called “Alligator,” if I recall. Not only that, but the dang cigarettes finally caught up with me. I still don’t know what it is about those beastly things that my psyche holds an attraction to – something about looking “Euro” perhaps. I’ll trade this pain in my throat and sickness in my belly for looking Euro anyday though – as is always the case when I try and extend my “cool” via those awful, awful things. I have to give Pat the nod for attempting to contact my common-sense department when the idea to “try some local German smokes” crossed my mind. “Why?” He asked, “Won’t they just make you feel like ass like any cigarettes?” Yes; yes they will indeed. It’s like going to a different country and wanting to taste their version of the shit sandwich – you’re pretty much guaranteed it’ll be just as bad as the one they serve at your local cafe. Enough… let’s move on.

Killed another presentation today, or, at least I thought did. When I sat down, Pat told me I bounce and sway too much. Unfortunately, this is not news to me – it’s been one of the banes of my public speaking skills for as far back as I remember. I suppose, bouncing isn’t as bad as being totally unengaging or dry – but it’s still a downfall. Anyway, I thought the discussion went rather well overall, and was happy with my effort. Still not sure it was worth a week in Germany, but I’m not protesting too much.

Right now, though, it’s close to 7:30am on my body’s internal California clock – but it’s only 4:30pm here and some guy is presenting in a thick German accent that’s making me sleepy. I’m stuck here for another hour at least, I fear. So, I write. I’ve got my iPod plugged into my laptop to charge, but I can’t plug the laptop in for the wacky German plugs and my forgetting an adapter – so it’s really just trading electrons from one battery to another. At least the iPod will be ready for the journey home, that’s all I care about.

The city we’re staying in is actually really cool, and dates back to medieval times (you can still see remnants of the original city wall from the olden times). Our hotel is on a cobblestone street in the older section of town. The whole place feels very “Euro” to me: with its outdoor cafes and tiny cars. We ate dinner at a small cottage-looking place, out on a vine-clad patio as the sun set. The food, and beer, were excellent, and by the end of the meal I’d developed a nice swimmy head from the combination of sleeplessness and dunkel bier. I debated on joining the folks who’d come over on the short UK flight for another round of beer, but my fatigue got the best of me and I turned in around 9:30pm. Had a nice restful sleep and hit the ground running at 6:30am this morning. Now, to catch you up to the present so I can continue writing: I presented, we had more dinner, we went for beer (see the “hung over” bit above), slept, and it’s 7am Thursday here as I write this (I’ll get to sneak this entry in just under the wire for US Wednesday).

Yesterday, I’d mentioned I’d be posting some images from Germany as well as Keaton. Believe it or not, I think I’m going to be able to come through on both. Not having near as many pictures of Keaton as I thought I did, I had actually decided yesterday to postpone my semi-regular weekly-ish update to her gallery. But, talking to Sharaun, she’d mentioned she’d taken quite a few good ones since I’d been gone – so I decided to walk her through taking them off the memory card and uploading to my server whereupon I could retrieve and post them from the other side of the globe. Worked great, and I’m happy to be able to follow through and give you this update to Keaton’s Gallery. But wait, there’s more. I was also able to cobble together a short set of images from our first couple days – even going so far as to produce one of my little movies. You can watch it here: autobahn.unregulated, and check out the rest of the stills here.

And, that’s about it folks – the laptop is down around 20% battery and I didn’t bring the goofy German plug adapter. I’m off to catch the end of this episode of the German Flintstones and grab a shower before a sausage and potato breakfast. Not sure about posting Thursday and Friday US, as most of those days will be devoted to travel for me – but we’ll see.

One Reply to “mover and a shaker”