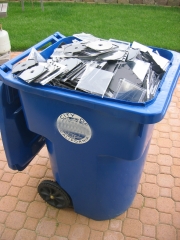 Saturday saw me forgoing my regular weekend cleanup, instead spending hours prying compact discs and their artwork out of jewel cases, rubber-banding them together between two slabs of cardboard, and packing them for sale. It was a bittersweet moment, as years of my life were wrenched from their comfortable plastic homes and piled neatly in stacks. Soon I’ll send them away for good, banish them to the “used” shelves at some NYC secondhand shop. I think they knew we were about to part ways, as their colorful artwork and shiny finishes silently asked me, “Why, Dave? After all this time, you’re just selling us off? We though we had something together, an arrangement, as it were… what happened to the Dave that blew his paychecks to get us? You’ve changed man… you’ve changed.”

I’ll be sad to see ’em go, but if I end up using the money as I plan (for Lasik), I’m sure I won’t regret it. Funny thing is, even after selling off some ~600 discs, I’m still left with an overwhelming amount that I didn’t sell (didn’t sell any of my Beatles & related bootlegs, which total about ~600 in and of themselves, and didn’t sell anything that was a traded-for CD-R copy from my old swappin’ days). The occasion was so momentous, that I decided to capture it for posterity – check out the pictures. (I’ve also decided that I’m going to start using the image gallery to store any future blog-supporting images, as it’s nice and cleaner than just posting images inline here).

Sunday morning I awoke to find the Easter Bunny had visit the night before while I slept. In my multicolored woven basket, he’d left the oddest array of Easter trinkets I’ve yet to see: a green plastic egg filled with Snickers, I carton of bubblegum eggs, lingerie, a bottle of champagne, tingly condoms, and KY “warming liquid.” I tell ya what, waking up to that kind of Easter basket after a proverbial “40 years in the desert” can do wonders for a man’s faith. With any luck, I’ll be able to celebrate two “resurrections” today.

This weekend, the hip-hop station Sharaun kicks most of the time was doing an all-gospel Easter Sunday. This got Sharaun and I talking about the stark dichotomy of the hip-hop culture: fuckin’, shootin’, and boozin’ on one side of the fence, and the Lord God on the other. Hip-hop folks may love their Lord, but they sure seem to love freakin’ and hustlin’ just as much. I’ve always got a chuckle when hardcore rap folks win awards for songs like “Take This Dick” and get up to thank Jesus and their grandmothers. I could never thank my grandmother for being my inspiration if my output was all about “gettin’ sloppy head in the back of a Benz,” and I’d be afraid Jesus might throw a lightning bolt at me if I did. For a good example of what I’m talking about, peep some lyrics to the new Nick Cannon song (for the record, I have no idea who Nick Cannon is – Sharaun brought this exemplary nugget to me this weekend and it fit perfect here):

Who you know a gigolo and still Christian?

Here, Mr. Cannon is stating that he’s not only a gigolo, but is also a Christian. That’s good, because without that setup, one might not catch the Godly undertones throughout the remainder of the song:

Cuz you know da Cannon be flashin, I’m gettin’ more head then an aspirin
At the strip club got me throwing singles tonight
Now she a born again vixen with some dick in her life
Sex real loud next room they can hear us
I’m lookin for a dime who can take the whole 9″
Check the sex tapes if you think I’m lyin’

“More head than aspirin?” Am I the only one who thinks that doesn’t make any sense? Must be some obscure biblical reference, Mr. Canon being the fervent Christian he is.

Goodnight my friends, until tomorrow.