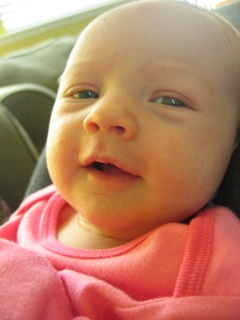 Another night in another hotel, but I got to spend some time at home. And, I got to update Keaton’s gallery with pictures of her smiling. I’m so glad I came home for a night, it was well worth it.

Tonight around 11pm California time, Sharaun called me and said something frantic into the phone, which I couldn’t understand – we were then disconnected. I could tell by her tone, I immediately knew something was not right. I called right back, and got her voicemail as she beeped in on the other line. I swapped over, only to have her hang up. I tried again, and again. Finally, I got her, and, in a garbled hush of panicked whispering tears she plead: “David, someone opened the sliding glass screen door. I heard it.” My chest leapt, “Where are you, do you have the baby?” I responded. “I’m at the front door, inside, I have the baby. What do you want me to do?” Mind racing, I replied, “I want you to go outside, go across the street to the neighbors’ house; now.”

I heard the front door creak as I imagined her walking out into the night with my daughter clutched tight in fear. “Did you call the police?” I asked. “No, not yet.” Now, not that this wasn’t a situation of the utmost urgency to me, because… it was… but because my wife, though I love her to death, has a reputation for hearing things go “bump” in the night – I called our friend Erik, who lives close, and asked if he could come first; do a house check. In true superfriend fashion, he was there in 5min flat. It was a painful 5min for me, listening to Keaton cry as my wife stood in the neighbors’ driveway trying to console her, she must’ve thought her mom crazy for running into the night like that. Soon Sharaun saw Erik’s headlights round the corner, and I was instantly relieved.

Thankfully, the screen was untouched: locked from the inside. Whatever she did hear, though, scared the crap out of her – and made me wish I hadn’t left more than anything else in the world. Sorry to scare you with all the exposition, when the denouement was nothing more than the bogey man and shadows – but it makes for good blogging.

Spending a week wiping with cheap hotel toilet paper really tears up a guy’s ass. I’ll be glad to spend a week at home next week before heading to Germany… and maybe they’ll have better paper there, who knows.

That’s it, goodnight. Get your fix from Keaton’s gallery, OK?