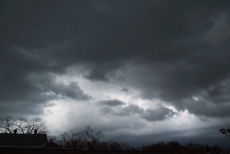 3:30 on a Monday afternoon and it’s clouding over outside, making the light in the living room all grey and somehow damp feeling. I’ve got a sleeping baby nestled in the crook of my left arm, a crocheted pink blanket draped over her naked-save-diaper body to keep her warm; I couldn’t be happier. Sharaun’s out shopping, something that I think is actually pretty therapeutic for her – so I’m glad she’s feeling up to it. The iPod’s jacked into the stereo on “shuffle,” and is currently offering up some Doors – fitting the weather well. Today I wrote about the baby more. Oh, and here’s the toplink to her gallery – updated with a few more things yesterday afternoon.

A week folks, one measly week – that’s all the vacation I asked of work when Keaton arrived. One week vacation and the next week “working from home,” which means I sit on e-mail and attend meetings on my cellphone. But, one week without worry, not spent thinking about what’s due next or who I have to call tomorrow. I seriously just want to lie down on the couch and drift off to a lazy sleep, soundtrack provided by my newborn daughter on my chest and the little smacking sounds she makes with her mouth. Just one week of that, guilt-free. I’ve got friends who just had babies, and they took off three weeks – I only asked for one, yet I can’t seem to “escape” work. It’s more me than it is work, I suppose – not being able to detach myself completely from that sense of responsibility – but it’s not made any easier by people who seem not to care that I want, nay, need, some downtime. So today, a little late I know, I decided to give the whole deal the figurative middle-finger. I’ve got all the time in the world for friends and family and my wife and little girl – but just for the rest of this week, work doesn’t get a spot on the rotation. You hear that work, eff you.

I’m still in that giddy new-father phase where I actually smile hearing my baby cry. Where I just like looking at her little mouth wide open as she tries to communicate with us, the skin around her little eyes pursing up tight as her face reddens. But man, we’re thankful daily that she’s as “easy” as she is – I can’t imagine having one with a less sunny disposition. We’re lucky. We haven’t had a terrible night to speak of yet; last night being the “worst” of it with back-to-back set and stanky diapers and feedings keeping all three of us up until 2:30am. But, after that she sleeps right through to her next boobytime and lets us do the same. She did pitch a fit through the emotional clincher of Brokeback Mountain Monday night, right as they were trying to suck me in – effectively preventing me from getting tied up in the gay-cowboy love story. She was entirely silent, however, during the buttlove-on-the-range scene – go figure. Anyway, she’s a great baby – and we’ve decided to keep her, or, at least evaluate her a little longer.

Goodnight folks, we love ya.