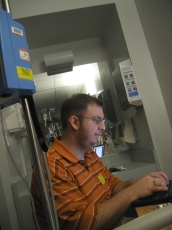 I’ll keep this link to Keaton’s gallery at the top of posts for a while. I haven’t added anything since yesterday, and likely won’t until later tonight, when I plan to be back home in the fat, loving, fiber arms of broadband. For now here’s today.

I had plans to do a nice long writeup about the final hours before Keaton was born, even had five or six paragraphs worth of gritty realism already penned, replete with whaling metaphors and enough blood and gore for Saw III. But, over the course of the day, I got completely bored with the story. Sharaun and I tag-teamed the narrative for everyone who called, visited, and even just between each other. Instead, I was just gonna do a simply entry.

I have a feeling that the blog is gonna take a while to recover from this baby, as I’ll be shelving the regular banal commentary in favor what I consider to be more exciting baby updates. That’s not to say you won’t be able to come here one day in the near future and be able to read about the latest indie rock, theological debate, or general rambling – but for now that’s all on hold while my life, and writing, adjusts to daddydom. Too bad I can’t keep up the compelling writing that was the play-by-play, I think this blog had more exposure from that entry than it’s had since its birth years ago – but I’m just gonna keep on doing what I’ve been doing.

There’s so much I want to write, so many different things running through my head – but I just don’t have the energy to develop the thoughts properly, so I thought I’d just rough them out and call it “good enough.”

I wanted to write about the great sense of relief I had today. Something like the feeling you get when you take vacation for a holiday like Christmas or Thanksgiving – when you’ve finally arrived at your destination, your family is there, and you know you’ve got at least a few days ahead of you where you’ll be able to completely relax and enjoy your surroundings. It’s kind of like that, having Keaton finally here. Like every breath is that big, cleansing deep breath you take as you step back and take stock of work well done. Dudes might be able to relate to me if I described this as being similar to the satisfied feeling you get after

I wanted to talk about the urge to show off this new thing, the desire to hold her out for the approval of others – a “look what I did” kinda thing. How good it feels when people come by and visit, and shake your hand or offer congratulations in the way of words, food, flowers, whatever. I can tell Sharaun enjoys it too, watching people hold her and coo at her, shower her with baby-praise. It’s not bad for the ego, and the “brave mommy” sympathies don’t hurt either.

I wanted to talk about how content I am just staring at her, watching her little eyelids flutter and as she wakes, working her tiny tongue out of her mouth. Today she fell asleep on my chest as it rained, and I just watched her there – her little short breaths almost imperceptible. I think I could look at her forever, she’s that freakin’ awesome to me. I know she’s more than just eyecandy, something about “lifelong responsibility” and whatnot – but for now she sure is a shiny new penny.

I just don’t have it in me to write more, maybe tomorrow. Grandma gets into town tomorrow evening (my mom first, then Sharaun’s next week), so we’ll be grateful to have her around to lean on for her previous baby-rearing experience (damn fine resume, I might add, as exemplified by my total well-rounded badassness). I might be in and out in terms of wordsmithmanship (is that an awesome word, or what?), but I’ll try to make it up by posting more pictures to the gallery. Granted, they’ll all be baby pictures – but y’know how it goes… new poppa and all.