Sitting at home early Tuesday afternoon, cellphone earbud and microphone dangling from my ear as I sit, muted, on a conference call. I had a dentist appointment over lunch, and decided to work from home the remainder of the day. Not because my numb mouth was too great a discomfort, no, more because I just wanted to be home – wanted to be close to any potential action, wanted to be near Sharaun. I feel like, if I can just be home, something might happen. Anyway, prepare for an entry having almost nothing to do with the fact that today is my daughter’s predicted due-date.

Does anyone else remember Rocketbals? Oh man, I so remember Rocketbals. Back in 5th grade, my elementary school went through something of a Rocketbal craze. Not unlike the run on Yo-Yos that happens in the days after the Duncan man comes to school, someone brought a Rocketbal to school one day and next week the skies above the playgrounds were thick with the things. I’ve always thought they were the coolest toys, and so simple: a small rubber ball (slightly bigger than a golf ball) with a loop of colored surgical tubing inserted through the center and glued to the thing. You’d put your thump in the loop, pull back on the ball, and let the thing fly. They’d go hundreds of feet into the air, and, with practice, you could actually get pretty good at aiming and playing catch with them. I’m assuming they went the way of the Jart – being banned as too dangerous or something – but I’ve always rued the day mine was swallowed by a storm drain. Thinking about it the other day, I decided to long onto the dub-dub-dub and do some hunting. Turns out, that great finder of lost childhood memories: Ebay, had one available. I immediately put in a bid and am anxiously awaiting slinging one of these things around again. Seems like I’m not the only one who’s searching for one, I mean, they were dang cool… when I get one I’ll post of video of it kicking ass – so you can visualize just how dang cool.

Note: After writing the above some time ago – I discovered that the original Rocketbal company went out of business, and a new company bought the patent – reissuing my childhood favorite as a dog toy, the Go-Frrr. When I found the site linked in that last sentence, I immediately remembered seeing one of these Go-Frrrs across the street at the local pet emporium. Anyway, I ran right over and bought one. I don’t care if you call it a Rocketbal or a Go-Frrr – these things are freakin’ awesome. 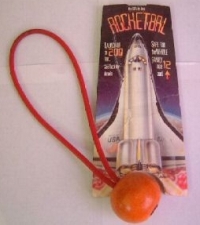 I know it seems like an odd thing to do, but I’ve decided I’m going to try and cultivate my own yeast – for no other reason than just to see if I can. For a long time, I’ve been fascinated with the idea of food-sources – meaning I’ve often wondered about our intrepid pioneer ancestors and their ancestors before them, and how exactly they managed to make the basic foodstuffs we today are so accustomed to picking up at any corner store. Bread, especially, has been an item of wonder – being the ultimate staple it is. Sounds simple, wheat for flour, some water, and a leavening agent. Oh, but that dang “leavening agent.” I’ve brewed on this all before, and had some success using the ultimate resource of the internet to satisfy my curiosity – but I’ve long wanted to actually put some of that learning into practice.

Anyway, following these excellent instructions – I’ve begun the process of getting my own “starter” going. This basically involves mixing some flour and water and letting it sit until it “catches” the wild yeast and bacterium that in the flour to begin with as well as floating around in the atmosphere. Once it’s nice and “soured,” you’ve got a natural yeasty “soup” that can be mixed with plain dough as the leavener – it’s a base material that you use to make your breadstuffs. Amazing that the process is so simple… dough left out will sour, and grow bacteria and yeast – at that point, rather than throw it away, you mix the bubbly froth into virgin dough to infect it and make it rise. Voila, you’ve got homemade yeast. You can do the same thing with water and starch, like water that potatoes or pasta have been boiled in. Making yeast is as simple as providing a nice home for the microscopic beasties that are yeast.

I’ll make sure and keep you updated on the progress of my starter, like it matters. However, the natural extension of this experiment is to take it out of my middle-class, mortgaged-to-the-hilt kitchen and make it more challenging. The end-goal here is to understand how Joe Ancienttimes made his bread, with only what he had around him. And, because it’s a fantasy of mine, the question I’m truly after boils down to: “Stranded on a desert island, could I make my own bread?” That one, and it’s cousin-question where the desert island is replaced by a post-apocalyptic barren landscape, are the real reason I want this knowledge. You’d need some kind of material suitable for transforming into flour: wheat, rice, potatoes, corn, rye, nuts, etc., some water, and some time – salt would help, but is not 100% necessary.

That’s relatively simple, right? So, I’m on an island – I find some nuts, or some cattails or some reedy thrushy things, boil some pre-salted seawater to remove any living nasties – and I’m good to go. Ferment-up some starter and get to baking on hot stones left in the fire. Soon I’d be making Island Flapjacks with coconut syrup. If you find this at all interesting, check out this Cree Indian recipe for Bannock (traditional Indian cake), made with corn, flour from cattails, and wood ashes as baking soda. Imagine the process by which people came to try putting the ashes of last night’s fire into the next day’s food. Awesome.

During this whole process, I learned that all bread was once sourdough – although it likely wasn’t called that because not all of it was actually “sour.” I was getting hung up on the term “sourdough,” which true bread aficionados take to mean any starter created using the above process – not to mean bread that tastes sour, like the San Francisco stuff. All “yeasts” of old were produced this way, and then dried and stored for later use. Modern commercial yeast are laboratory-bred for fast-action and “neutral” flavor – while bread flavor of yore was based on several different factors, including starter cultivating temperatures and mixtures, and of course the breeds of yeast and bacteria that were floating around the region from whence they came. Once you got a starter that made good bread, you held onto it – drying it and using it forever and ever to reproduce the flavor. Yeah, I’m kind of skipping over things like salt-rising bread and the non-leavened breads – but my focus today is on “making yeast.” Hey, it may be boring to you, but to me it’s totally amazing to think of old world folks arriving at these processes via trial and error. But, let’s move on anyway…

Oh my God, I seriously wrote about bread and Rocketbals. Sorry Keaton, daddy loves you.

2 Replies to “it all starts somewhere”

Leave a Reply to Glen Bevan for Proball Cancel reply