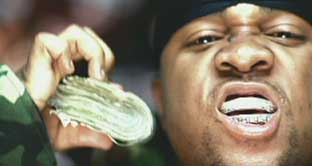 Happy Monday… lately I sometimes feel like the days and weeks are simultaneously dragging and speeding by blurrily. It seems like this day will never get here while feeling like it could be tomorrow at the same time. Think, think, think… babies and money and all sorts of things. Let’s move forward.

OK, I’d heard about it, but hadn’t actually heard it. Then, this weekend, I decided to hunt down the new Built to Spill album, which leaked a week or so ago. Word on the street was that the album sounded great, and it’s certainly one of the more anticipated efforts of 2006. Rumor also had it that the early leaked version was protected with a unique type of DRM: each song being marred by rapper Mike Jones asking, “Who is Mike Jones?!” every minute or so. Yeah, so, Mike Jones isn’t actually on the new BTS record, but he was sampled over the top of this leak… either by a band with a sense of humor, or some sadistic, perhaps rap-lovin’ and indie-hatin’, release crew. Whoever the culprit, the “Who is Mike Jones?!” form of copy protection is probably one of the more effective schemes I’ve run across. It’s hard not to listen to the songs without trying to guess when the next “Who is Mike Jones?!” sample will pop up, and it’s impossible (yeah, completely impossible) not to laugh when it eventually does. I like the album so much though, that I’m afraid I’ll become accustomed to the Mike Jones version. I’ll be the guy at the BTS show in a few months who shouts out “Who is Mike Jones?!” every few minutes so I can experience the songs the way I learned to love ’em.

I’ve been wondering if I should change my blog theme… I like the front page OK, but I think I’d like to change the comment section. I’ve got some stray div tags that get put in when you’re looking at a post in permalink/comment view which I’d love to clean up. Thing is, WordPress theme implementation has changed sooo much since I first hacked together my blog, it’s almost like I’d have to start from scratch. My index page and stylesheet, while functional, are spaghetti on the inside. My CSS skills are mediocre at best, and most of what I get is luck rather than skill or artful use of the stylesheet. I’d love to start with a clean modern WordPress them and start hacking from there… just so I could slim down my main page loop code and bloated stylesheet. However, that’s a lot of work… and I am partial to how things look now – it’s been my format forever, after all. What do you think, friends? Should I redesign from the ground-up, or are you, too, familiar and happy with the look of this page? I’m just not sure.

Continuing the blogging thing, keen observers may have noticed that I removed the toplink to my “cast of characters” page. I did this because the thing was just sooo outdated. I thought about going through and making a sweep of it, to bring it up to date… but the thing about that is having to stay on top of it. I’m not sure what the eventual fate of the page will be. I entertained a quirky thought about opening it as some kind of limited-access wiki where each person in the cast would own their own bio, and be responsible for keeping it up-to-date. Those who didn’t log on and polish their info once every three months or so would be bubbled-down and eventually “hidden” from the cast, re-listable only after an update. It’s a cool idea, maybe I’ll give it a shot. Right now though, the page isn’t gone, it’s just delinked from the header – several older entries still point to it. We’ll see.

Let’s do some linking, shall we? I know it’s lighting up the blogosphere lately, and I’m rather late to the party – but for the benefit of those who may have not seen this yet, I really recommend reading Jeff Jocoby’s We Are All Danes Now op-ed piece over at the Boston Globe. I’ll let you read it and mull it over, but I certainly enjoyed it. Not sure I like the term “Islamofacist,” but I do like the article.