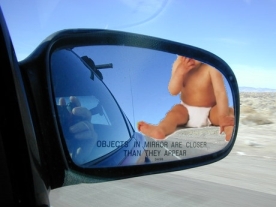 I debated on using the baby-in-mirror thematic Gimp today, or saving it for a big splash on Friday – since I had two designs to choose from. Ultimately, I think I made the right decision… as it looks pretty awesome to me right now. Anyway, bringing it back… today was one loooong day. Had a manager-moot at the local sushi joint, which went well and was full of HR’s-not-watching dirty-talk. Even though dinner was good, the 15hr day was a bit much. Glad to be home.

Looks like I’m not the only one who’s not been completely taken in by the all-powerful Arctic Monkeys hypemonsters, as Stylus seems less than exuberant (Muzzle of Bees highlighted the relevant portions of the review well in this post). Buzz-mongering aside, I do have to admit that I’m sitting her giving the album another chance (although I delete “I Bet You Look Good On the Dancefloor” from the playlist, as it’s just been beaten too far into my head to hear it again). But seriously, why is this album being compared to the Beatles?

Also in muzak, I think I mentioned that Sharaun had purchased us Coldplay tickets for my birthday a while back – and the day is nearly upon us. I’ve never been Coldplay’s #1 fan, but I’m actually pretty excited about seeing them live. And… I guess, since it’s somewhat related… I swear, I full 50% of the time I plug my iPod into the PC iTunes won’t pick it up. Oh, it shows fine in Windows as an attached drive, I can browse through it without issue. Even the iPod Updater sees it, but iTunes, for whatever reason, refuses to recognize the device. Not only that, but I promise that tags I specifically remember going in and cleaning up (Derek & the Dominos vs. Derek and the Dominos) routinely switch back. Stupid, stupid iTunes… why can’t they make it any better than the crap it is?