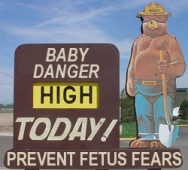 Near 10pm Monday evening, sitting in the “computer room” for a change, since Sharaun’s holed up in here working on progress reports for her class or something. She can’t concentrate with music, so I’ve got the iPod on shuffle in the “blues” genre – really been getting off on listening to blues standards lately, maybe it’s the weather. Still need to do the dishes and put some coffee in the pot for the morning… too late already. I guess today’s thing is a hodgepodge of little one-off paragraphs that didn’t fit anywhere else. Oh, and you may notice the larger-than-average post-accompanying pictures of late, just roll with it, it won’t be forever – I’m having fun.

Even though some may say it’s too early to call, I think we may have a frontrunner for media-overdose of 2006: the trapped miner. 2003 it was shark attacks, 2004 was attractive white girls going missing (extra bonus if they were pregnant), hurricanes ruled 2005, and it’s looking like ’06 may shape up to be a cave-in frenzy. If only we could get some attractive, pregnant white woman trapped in a caved-in mine, with rescuers unable to reach her due to a massive hurricane which has picked up sharks from the ocean and is raining them over the West Virginian countryside… CNN’s head would asplode. Really, I just wrote that whole paragraph because I pictured swirling clouds “shooting out” hungry sharks and cracked up at a vision of them hurtling towards earth, gaping razor-mouth first. Hahaha. Shooting sharks.

Do you know that nowhere on all my DirecTV channels is there any instance of Gilligan’s Island? Are you for real? We have 300 some-odd channels, each with 24hrs of programming, and not a single one can show an hour a week of a classic like Gilligan’s Island? What the heck am I paying for if I can’t even watch Gilligan’s Island?

Before I leave, I wanted to share a little thing that happened to me a few weeks ago. I wrote about it then (post 611, this is 621), but binned it for the next God entry instead of pushing it through. Anyway, I basically cut and pasted it out of that work-in-progress God entry here: Friday night I had some beer. I was driving home afterward (buzzed driving is drunk driving), listening to Sufjan’s Seven Swans. The song “The Transfiguration” has always been a favorite or mine, and this particular night I was extra struck by its religious imagery. At this point in the old entry, I quoted the lyrics in full. Rather than do that here, I just wanted to link to it so you can hear for yourself. It’s a great tune (if you like the trademark super-super-super gay Sufjan sound), so don’t let the God-talk scare you off.