Who says you cant lateblog on Fridays? No one I know! Anyway, here it is, late, since we didn’t make it home from the Wolf Parade show until 3am last night. About the show… I was underwhelmed. Unbeknownst to me, we caught the very last show on the tour, right before the band was heading back north for two months rest. That meant a very drunken band, and a pretty burned out vocal performance from the lead-guitar singer guy (not to be confused with the keyboard singer guy, neither of whom’s name I know). Can you say “whom’s?” Anyway, the show wasn’t very enjoyable for 8-months-pregnant Sharaun, and worrying over her hampered my experience a little too. Basically, I saw my hipster life die a slow death last night, while my family life phoenix began to flutter under the pile of ashes – and it all happened over an hour and half at a Wolf Parade show. Now some crap I wrote yesterday.

I wanted to thank stereogum for bringing my attention to Bill O’Reilly’s appearance on the Letterman show this week, as I found Dave’s conviction in the interview pretty out-of-character – yet a welcomed taking-on of Mr. O’Reilly. Hopefully the WMV link sticks around long enough for you to check it out as well. I’m still surprised that it’s taken criticism of this war this long to become this public, but I suppose that you could argue that criticism will inevitably grow in proportion to the length of the engagement and, more importantly, number of lives lost. Regardless of time and lives, I think it’s past-due. Knowing we can’t just pull out and nut on Iraq’s stomach at this point, one can make a fair projection of the pro-war curve – and so can the GOP. I’d imagine it’ll go something like this: 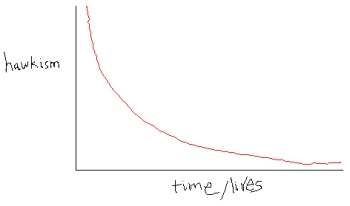 Of course, there will be outliers – those who will support the decision to go to war until the very end. You’ll find some of these people to be very intelligent, sensible, well-versed, and extremely convicted; you’ll also find some of these people to be ignorant, blindly accepting of authority, and willing to swallow a live grenade were it marketed to them correctly (likely wrapped in an American flag, affixed with J. Christ’s seal of approval, or heavily advertised during NASCAR). Likewise, you’ll find those who wouldn’t vote for war were an Iraqi-sanctioned team of terrorists in their living room slitting the throats of their family with dull wooden knives made from felled-for-sport 300 year old American redwoods. I am none of these, and I hope that I am among the growing majority; a growing majority that wants to know. If not for WMD… then what for? If not for 9/11… then what for? If not for proof of state-sponsored terrorism… then what for? What the heck for? To make the world a better place, of course! Yay! We’re all rainbows and kittens.

That’s it, weekend time. See ya.

7 Replies to “it all happened at the wolf parade show”