By the time you’re reading this, I’m no longer in India, but whizzing through the skies bound home. That’s OK though, because through the magic of scheduled posts – I could have entries lined up for weeks (if I could write that much, that is). So, if you don’t mind the Pulp Fiction timeline, here’s something written Thursday in India, which is Wednesday in the US, and posted Friday – figure that out, Tarrantino.

There’s this huge beehive clinging to one of the branches of an immense, sprawling tree just outside my window at the hotel. I’m fascinated by this beehive, I don’t know why. Maybe because it’s easily the biggest beehive I’ve ever seen, I mean, this thing is rockin’ big… like bee Los Angeles or something. When I first saw it, I thought it was just one of those tree-tumor things, a large growth or abnormality in the branch – but upon closer inspection through my camera’s zoom, it was clearly a bee metropolis; a sagging mass of squirming bees, busy doing whatever bees do (humping and making honey?). I don’t know why, but I have the strongest urge to chuck something at this bee city. Every day my hotel room comes stocked with three thick-skinned Indian fruits that resemble oranges or tangerines or something – these, I figure, would make the perfect beehive ICBM.

This morning, on the way down to breakfast, I tried to mentally gauge the distance from the balcony to the hive – just to see if my poor throwing arm may even have a shot at a direct hit, and I convinced myself that, yes, I could hit it if my aim was on. What’s more, the distance is great enough that I think I could upset the bees and still have ample “run away” time before they even knew where the projectile came from. So, I’ve imagined the scenario in my head: A direct hit, and thousands of disturbed bees swarm out in search of vengeance. Meanwhile, I safely retreat back into my room. The only way I’d really do it was if there was someone here to film the event – since one of my chief concerns in life, for whatever reason, is documenting crap like that and posting it to my blog as if people would be interested. Alas, there is no one here to film it, and when I mentioned my fantasy to my wife she didn’t really understand, “stupid” is how I think she chose to describe it. So, in place a super-cool video where I successfully smack a huge Indian beehive with an orange – here’s a picture of a huge Indian beehive: 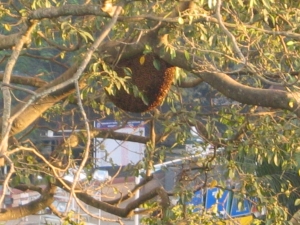 If you were here with me, you’d understand, right? You’d film me as I hurled fruit at this hospital-visit-waiting-to-happen, right? Yeah, that’s what I thought. If there’s one thing I know, it’s that I’ve managed to surround myself with friends as retarded as I am who would happily watch me put myself in harm’s way for a cheap laugh.

4 Replies to “me agin the bees”