Today I’ve got a lot of images, some of them big. At first, I considered shrinking them so that those of you with smaller screen resolutions wouldn’t have the site layout being all messed up – but I decided at the last minute that I didn’t really care. So, hope you enjoy this Monday’s entry.

What LP sets my heart a’ pitter-patter these days and nights of summer? This week, it’s a little gem called Underwater Cinematographer by yet another Canuck collective – The Most Serene Republic. Lead croon has a very Gibbard-esque voice, and you can even sometimes hear strains of Gibbard’s work here (Death Cab, Postal Service, etc.). But I don’t want to pigeonhole the band… as they definitely have a varied sound… and really kickass drumming at times. Plus, they scream courses… which for some reason, I love. You give me a studio full of people standing 10ft away from the mics screaming a ragged course at the top of their lungs, and I’m going to buy your album. These guys did it twice, and in a less-freaky way than the Polyphonic Spree’s saccharine-cult mantra version (which I also totally dig). Survey the scene for yourself here, headphones required.

This weekend Saturday was bliss. I swam all day in the pool at Pat’s house, ate some grilled hamburgers, and then ended the night by watching the hotly anticipated remake of Willy Wonka and the Chocolate Factory.

Sounds great, doesn’t it? Yeah, it totally does… I wish that’s how it actually went down. Here’s the real story:

This weekend Saturday was bliss. With weather.com reporting the high that day at 108° F, Pat had called and asked if Sharaun and I wanted to come over to his place for some swimmin’ and grillin’. Sounded like perfect summer fun to me, and it would actually be the first time I’d be able to confidently go swimming without fear of death. I headed over, wifeless, due to headache, around 2pm. Shortly thereafter, we were in the water. Together, we balled our fists and shook them at the summer swelter, symbolically, of course, by drinking cold beer and lounging in the tepid pool. Hour by hour we defied the shimmer of heat on the horizon, beer cans amassing at the pool’s edge at an alarming pace. Before I knew it, 6pm had arrived and more folks had shown up for the cookout. Oh, and I had made an even trade: swimming in the pool for swimming in a drunken haze. Stumbling inside, I managed a burger and a half before laying down on the floor for some rest. Waking up, I wasn’t in any shape for a trip to the theater… so Sharaun took me home where I crashed on the couch alone. I missed the movie, which really bummed me out. I woulda done better for my day by drinking a little less and making the movie… but I guess it all worked out OK. I still had a nice summer day, and my liver got a workout.

You guys wanna hear some crap? Sharaun got her degree right, her Masters in Education. Spent extra time and extra money at school to get that graduate degree. Right now, we’re still paying that thing off – as graduate tuition is like 3x normal in-state tuition. Anyway, she got this degree while we were back in Florida, and would we have stayed in Florida – she could’ve immediately started working at any public school with a Florida teaching credential. We, however, did not stay in Florida; we came to sunny California – for my job. Upon arriving, she learned that her two Florida-earned degrees didn’t hold much water here on the West coast. In order to begin teaching, she’d 1st need to apply for an emergency credential (good for three years) and then take some test. She passed the test, a yawner that most high-school grads would do fine with, and scored her emergency teaching credential. And, for the next two years she applied and interviewed at every school district around. Despite the news’ constant blathering about California’s “teacher shortage crisis,” she wasn’t able to land a job to save her life. Finally, a long-term substitute position was her foot in the door and she scored a full-time position. And, for the past three years she’s been teaching on that emergency credential.

Now we’re caught up to the present, and her emergency credential is expiring. Thing is, the process by which out-of-state degree holders earn “real” credentials is insane. There are a couple options, all of which will cost us considerable amounts of money and her considerable amounts of time and stress. The constant between the options is this test she has to take, the CSET. Far from the high-school yawner described above, this is a comprehensive test which covers a variety of topics – and is not easy in the least. Y’know, I can talk about it all I want and you probably won’t get the proper appreciation for the level of absurdity I’m trying to convey. So, here, painstakingly excerpted from the practice tests online, are some of my favorite questions that California kindergarten teachers are required to answer to obtain their credentials: 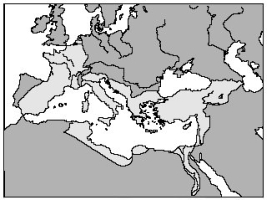 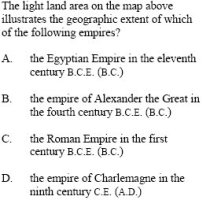 I feel like I should know this – but I don’t. I think I could make an educated run at it, but I don’t know it for sure. Oh, I have a bright yellow notebook at home that contains all my notes from 9th grade World History with Mr. Hines – it’s likely in there… but it didn’t make it from there to in my head with any sense of permanence. Here’s another: 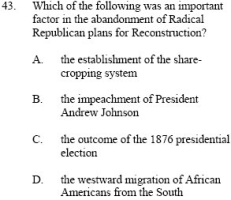 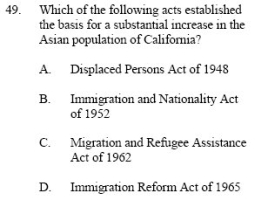 Double-header here, fit better with the layout. Re: 43, the Radical what now? I swear I never even learned this. I couldn’t even come up with a good educated guess on this one… does that make me stupid? That second one has got to be a trick right. Even if I had ever heard of this thing, all these would sound right to me on test day. You know, you don’t learn California history if you don’t go to primary school in California… Let’s see what else we got here: 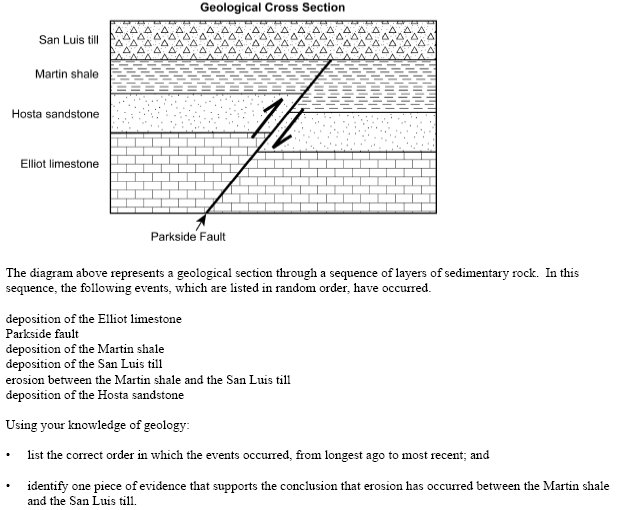 Using my knowledge of geology?! What the… oh yeah, because I would have, of course, studied geology extensively in my pursuit of a degree in teaching elementary school. And here we go:

OK, now, for real. Shut up. Just shut the hell up. These things are making me more and more angry as I go along. Soon enough I’m about to jump out of my CSET desk and jam my two #2 pencils in the proctor’s eyes. This test is so stupid. And now… I’ve saved the best for last… my personal favorite:

Oh. My. Word. What the crap? What class, exactly, would’ve prepped me for this question? Music theory? Every person aspiring to be a teacher in California must be able to read music and identify melody, rhythm, and form. Stupid-ridiculous.

Were she the graduate of a California college, with or without a masters degree, none of this would be required – none. But because her degree is from out of state, she has to jump through innumerable hoops before she’s declared “fit” to teach the budding young’ns of Northern California. I’m all for holding teachers to high standards, but this crap is pretty ridiculous to me. Sure it’d be great if all our teachers, K-12, knew how to prove the Pythagorean Theorem – but I’m pretty sure you can handle 3rd graders just fine without the knowledge. Whew! Now that I’m done venting…

That’s it. Nothing more. Until tomorrow, goodnight.