7:30am on Monday morning… I’m sitting here watching the minutes tick by before I have to get up and go to work. Back to the US and the reaction is pretty standard: I see all the things I’ve been putting off as if for the first time. The backyard that I’m not quite done creating, now overrun with winter-rain-fed weeds where sod should be. The front yard planters not weed-blocked yet, also blooming full of winter-weeds. The 2″ high grass waving in the breeze. It’s all calling to me, “do something.” The backyard has been so close to done for so long… I use the rain as an excuse to not get out there and do it. But now is a great time to get sod down, when there’s still some moisture before the ovens of summer.

July is my ten-year high school reunion. Ten years; I’ve been out of high school for ten years. Only thing is, talking to the friends I still talk to from high school – not one of them is planning on going. They just don’t want to go. Up until recently, I was thinking how it might be fun to see everyone again. But, if no one is going… why am I going to fly across the country? I imagine the idea of a high school reunion might be scary to some. Maybe to the the go-nowheres or the do-nothings. Maybe to those who got fat or those who lost hair. Maybe to those who feel old without the children so many others have. Maybe to those who are afraid their success will make others feel bad, or those who have no success at all. Maybe to those who have gone those ten long years without a relationship to speak of. Or those who feel those who’d actually attend are beneath them. Whatever the reason, I’m certainly not making a several-hundred dollar trip home to see no one. And before you say it, yes I realize some may just “not want to go,” rather than being afraid for one of the above reasons.

I’ve been quiet about it too long now, but Pitchfork’s new site layout really blows. It’s cluttered, poorly organized, and requires hated side-scrolling because it hangs off my screen edge even in large resolutions. One of my favorite features, “Best New Music,” has been moved off the mainpage onto some clickthrough link. The news is buried somewhere mid-page which requires scrolling, and there’s way too many flashing/blinking ads to distract from the content – it looks like a freakin’ Christmas tree. I miss the A-Z artist list for easy review access – now you have to search for everything. It just plain out sucks compared to the old layout. On top of it all, they don’t have an RSS feed so I can read it in the uncluttered interface of Feedreader. 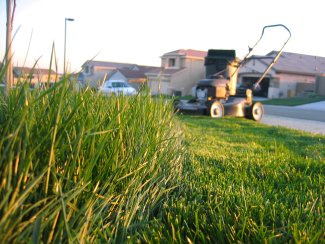 I rumble and grumble a lot about mowing the lawn, trying to find some excuse to get out of it, but when I’m actually out there watching my late-evening shadow stretch out long in front of me – I really enjoy being a homeowner. I take a certain pride in it, almost smiling like Ward Cleaver would as he tread the lines on any Saturday. And even though it’s barely 70° I still sweat like it’s 95°, it’s just in my blood. This time though, it took forever. I left work at 4:30pm to get a jump on the task, knowing the lawn was extra-long. And forever it took, I finished up just as there was no light left to work by. It looks good though, and it was long overdue. The only thing that coulda made me feel better woulda been if I’d managed to fit a haircut in today as well. Maybe tomorrow.

One Reply to “kick the can”