So, despite some minor hiccups, everything seems to have come over fine. Migrating from a Windows machine to a Linux machine can have its little quirks, like the fact that Linux is case-sensitive and any instances where you’ve ignored file case on your Windows-site code are now broken links on a Linux host. But, with the help of some automated link-checking and human spot-checking, I think I’ve got most things right. Not that you care, but, look, I nearly made a paragraph talking about it. That’s wordcount baby, and wordcount means quality. Right?

A buddy of mine is in Taiwan right now, staying at the “company approved” hotel where my Taiwan girlfriend works as a bartender, so I told him he should pay her a visit and tell her “Dave says hi.” Apparently he did, and she gave him some free fries for “being my friend.” So, if my sheer awesomeness wasn’t enough incentive for you to become my friend – I now come with free french fries. I’m headed back in early December, and I can almost taste the bloody marys and cigars. Oh, and the fish eyes… can’t forget the fish eyes.

I remembered another story I wanted to write down, so here I go. We’re in 8th grade, and one of our passions is just “walking around” town. We’d walk everywhere, loitering first here, then there. One of our old town’s most stickout features was a big tall cement plant that sat along the railroad tracks just off the highway. It had several cool buildings, and a lot of neat-looking machinery and hardware. There were huge conveyer belts running from the ground to towers in the sky, big warehouses, and one really tall “silo” looking thing. Now, I don’t know much about cement or mining or whatever, but pretty much every “materials” plant I’ve seen looked pretty similar. The railroad tracks ran right through the place, presumably for easy loading. Anyway, we were always intrigued by the silo in the distance – and one day decided to walk to it.

When we got there, we ducked under a gate and headed onto the grounds. It was a weekend, so the place was dead. We’d soon find out, however, that it being dead had nothing to do with it being the weekend. We walked to what was the main building, and found some huge roll-up loading doors wide open. Letting ourselves in, we found the place to be completely abandoned. Freshly abandoned though, it would seem, hastily or without care, it seemed, too. Desks still had pens and paper on them, there were calendars on the wall with semi-recent (within a month) dates from the past marked on them, and although there were light-bulbs in the sockets, there was no power. This was no cubicle-farm, it was a huge empty warehouse with a couple “offices” tucked in the back. We explored the warehouse, then set off to explore the remainder of the place.

We climbed to the top of the conveyer belt towers, explored some deep “tunnels” that went underground (with mine-shaft-looking handcart tracks running down them), and just generally poked around the whole place. Finally, satisfied it was truly abandoned, and with a few hours of uninterrupted trespassing bolstering our confidence – we did what any good teenage boys would do: we trashed the place. I remember throwing bricks through windows, tossing rocks at fluorescent lights, and even going to all the trouble to uproot a whole toilet from the men’s room, then sharing the task of precariously hauling the heavy thing up with us as we climbed the thin ladder to the top of the conveyer tower – all so we could toss it from the top and watch it explode in a hail of porcelain ten stories below us. It was awesome. Eventually, we got bored breaking things and decided to explore the silo.

The silo was much taller than the conveyer, at least twice as tall and maybe half that again. As we walked over to it (it was on the other side of the tracks), we noticed that there was a whole other building hiding behind it. Before we hit the silo, we decided to explore our new find. The small building was just an empty warehouse, with a truck-ramp on one side for loading or something. It was a strange split-level thing, one quarter of the floor being about seven feet taller than the remaining three-quarters, and there was a small ladder leading up/down between these levels. What was even better – we were obviously not the first to have discovered the place. The walls were covered with paint, sprayed on, brushed on, all graffiti. This was a party place, this was a hangout. I remember seeing “If you don’t eat your meat, you can’t have any pudding” crudely emblazoned across one will, as well as the requisite Kilroys, peace-signs, and expletives. One wall was a mural of sorts, with the words “groovy barn” in the center. So that’s what we called it: the groovy barn.

There was a pile of charred wood and ashes in a blackened corner of the building, and beer cans/bottles littered the floor – we instantly loved the place. At the base of the mural wall were several cans of paint, they called to us like sirens. Before we knew it we were using our hands to add our own decorations to the walls and floors. We smeared lines from Doors songs, traced our outlines in a human mandala one the floor, with the words “I am he as you are he as you are me and we are all together” written in a circle around us. Then we finished up the cans by throwing paint all over the place. We had a blast, but it was clearly time for the final frontier – the silo.

The silo part of the silo was jutting out of a smaller building below. We entered the smaller building and poked around a bit, finding some more graffiti sacks upon sacks of sand or something. The place didn’t look like it had been in a state of disuse for too long. Finally, we found what we were looking for. Still inside, we climbed a small ladder up to a kind of “hayloft” place. The hayloft had a door to the outside, which let you onto a small platform on the outer base of the silo; a tiny, rickety-looking ladder stretched up the side of the silo to the sky. We were scared, but we decided to do it.

I remember being scared out of my mind. There was nothing to hold onto but the ladder, nothing to break your fall if you slipped, and it was high. The rungs weren’t very wide, and the welds to the silo were rusty-looking. Being scared made it even more fun, and after a couple starts, retreats, and some group chest-pounding, we made the final push to the top. At the top, it was awesome. The view was incredible, and you had a feeling of conquest, over fear, over the silo, over anyone who’d be too afraid to do the same – it was the things teenage boys dream of (well, the non-sex things, at least). We did all the “look how high I am!” things you normally do, spit, peed, threw rocks, etc. Finally, we got scared down when a man in a truck pulled up, even though he didn’t spot us we decided it was time to split.

We went back to Rinker (yeah, that’s what the place was called) quite a few times, although mainly just to climb the silo again with new people. I remember one time even taking “the girls” (Kyle and I had significant others at the time) and coaxing them to the top. Eventually, when just the guys and I were visiting, a police cruiser rolled up on us and gave us the standard bit about trespassing and whatnot. After the police thing, we didn’t go back much. I think the last time I went, it was with the same crew I’d first been with – we made one last climb to the top and, in an act of retribution, left my by-then ex-girlfriends name and number with the standard “for a good time call” message in thick permanent marker. While up there, we discovered that were weren’t alone: a huge nest of bees had made their home in the eaves of the silo. Freaked, and having accomplished the slander we set out to do, we headed down and never returned. 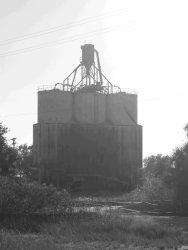 I’ve often wondered if our painted messages still exist in the groovy barn, or if Robin’s name and number still make promises of a “good time” atop the silo. Last Christmas I forced Sharaun to take a drive out there and snap some pictures of the place – but I was too chicken to squeeze through the gates and check. Maybe this year… owell. Oh, and this story reminded me of the crane story – I’ll try and get that one out too.