Last night was the sneak-attack Decemberists/Shins show in Davis. Pat and Cynthia accompanied us, as Cynthia was the conduit for tickets being a UCD student and all. The acoustics during the opening band were kinda lacking, and I don’t know if I just got used to the hollow “high school gym” sound or if the equipment/mix just got better with each act – but the Decemberists and Shins sounded great. Was a fun night with an earlier bedtime than the usual SF shows.

Shipped off a couple of old 5.25″ Apple IIgs floppy disks today, sending them to a dude that does file recovery from old Apple disks. I found them in the spare room the other night. They are mine and Joey’s class disks from our middle school Language Arts class. I’m pretty sure they contain all our work for the year, including essays and whatnot. The main thing I want off of them is our “final” project from that year: a long fictional narrative. I’m pretty sure mine was called “Quest,” and was a 7th grade attempt at fantasy. I remember being extremely proud of it at the time, which was before I ever even read the Hobbit. I think Joey’s was about some kid who went inside a waterfall in search of some treasure or something? but I can’t remember. Anyway, I’m hoping to at least get those stories – and kind of getting my hopes up for some recovered surprise, maybe some lost stories we were working on or an interesting assignment. Anyway, it cost $36 to get text files off two disks – hopefully it’s worth it. 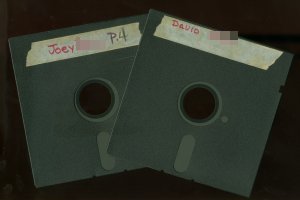 One the “indie music is on TV” tip, Pat brought over a Newsweek article to rub in my face the other day. Here’s the online version of the article, without some supporting graphics from the print version. In the actual magazine, they have a graphic that does that “if you like this band, try this other band” thing – pointing people towards indie bands that may fit their likes. The bands in that sidebar graphic read eerily like my Best of 2003 from last year: Shins, Bright Eyes, Postal Service, Death Cab, etc. It’s actually a good article, and they mention several newish albums that are also on my current playlist. I like the quote from Gibbard about “feeling” something coming? I wonder. What the heck am I gonna listen to to be cooler than everyone when everyone’s listening to indie? Man, a self-important music-snob’s job is a hard one?

OK, I have nothing more. Oh wait, I got one thing. I forget where I stole this from, but check out Britney Spears’ backwards message. If you play the chorus of “Hit Me Baby One More Time” backwards, you can hear “sleep with me I’m not too young.” OK, where do I sign up?

One Reply to “a 7th grade attempt at fantasy”