I wonder if there’s anyone who reads this that I don’t know about? I know of a handful who still read it every so often, but I wonder if there are any random people who read it – kinda like me reading the other online journal I frequent. Just a random person reading all about another random person’s daily events and stuff. I guess there’d really be no reason for someone to just “happen” upon the site – so perhaps not. This will be my 168th entry in about 8mos of writing, not bad. (I know that because there are little “hidden” direct-links to each entry next to the date up there, and they have the post number in ’em). It’s a habit now, so I keep going.

The SMUD people came out and did a tree-survey of my backyard. They give free trees in an effort to conserve energy through shade they make. It’s a cool program if you want some free trees, and they have a lot to choose from. The lady mapped out my backyard and then suggested some tree varieties and placements. In all she recommended seven trees, four of them medium-sized flowering pears and three different kinds of larger maples. I don’t agree with her planned placement 100%, but I’ll stick to it for the most part. I just don’t want to eat up all the grassy space with trees. Would be nice to have some shade on that back part of the house though. They deliver the trees sometime next week. Pretty soon my backyard may look somewhat backyardy… with sprinklers sticking up from the dirt and baby trees growing among the rocks. Awesome.

This weekend is our first Yosemite trip of the season. We’ll probably do a couple short hikes on Saturday and Sunday, and just the one night of camping Saturday. Well, provided we’re able to get one of the 1st-come, 1st-served sites in the valley. Should be fun as we’ll rendezvous with my folks Saturday night, who’ll be there celebrating their anniversary. But the weekend won’t end there this time, not for me. I’m taking Monday off and taking a 40ft boat from Sacramento to San Francisco. One of our buddies works at a boat shop and they take their big ones to the boat show in SF each year, they put in on the Sacramento River and take a nice slow trip all the way over. The weather should be great, so I’m really looking forward to a nice relaxing day on the river – and more importantly, not at work.

When we were freshmen in high school I was reading a ridiculous book which I’d borrowed the book from a girl I was dating. It was a fictional account of a woman who was involved in some manner with satanic ritual abuse. It was an awful book, but I was into that whole occult thing. Being a more exploitive rip-off of the Rosemary’s Baby theme, the book delved into rituals and even contained some mock satanic-speak from the supposed events.

As I said, at the time I was big into the whole occult thing – and I had also been reading these reference books at the library which were like “encyclopedias of the occult.” Each volume of these encyclopedias had a huge Baphomet on the outer jacket. For some reason, I got the idea to make up a fake event flyer for a make-believe satanic gathering. Using a photocopy of the very authentic-looking Baphomet from the encyclopedias and a mixture my own words and the satanic-speak from the book, I created a mock “promotional flyer” for a supposed satanic gathering in my town.

My plan was to pull a prank with the fake flier. I gathered my usual crew of trusted friends and let them in on the idea. An ambitious plot for four freshman, we were going to sneak onto school grounds late one Sunday evening and stuff the folded fliers into as many lockers as possible – concentrating on the “senior” lockers. We ran off 100 copies of the flier and somehow got up to the school around midnight one Sunday evening. After scaling the gates to get inside, we split up and ran down the halls stuffing pre-folded satanic ritual invites into as many lockers as possible. We must’ve made too much noise, because the groundskeeper/security-guard ended up rolling around the grounds in a golf cart. Luckily we all scattered and managed to escape before being caught, and we planted most of the fliers.

Monday morning the suspense was almost too much to bear. By third period the fliers were the talk of the school. Being relatively unknown as just simple freshmen, we managed to stay under the suspicion radar pretty well. By lunch the administration had been involved as several of the more concerned senior girls had shared the flier with the office staff. Near the end of the day, Sharaun and Natalie confronted Kyle and I to ask if we were behind the fliers. We of course denied all knowledge.

Over the next few weeks, there was talk of a satanic cult in the small city of Rockledge. The flier was shown to two separate church youth groups and touted as absolutely authentic in language and symbolism (supposedly even the correct demons were named). I know this because one of our conspirators, Joey, was actually in one of the youth groups where the flier was presented. The entire group of church teens was warned about satanic cults and their influence, the whole time the flier was being used as “proof” that this sort of activity was real and happening right in their own backyard. Supposedly the youth group leader sent a copy of my little prank to a “cult expert,” although we never heard any more on that. I always wondered how Joey kept it together during that speech… I remember he was almost exploding when he called to tell us what had gone down.

Being as the flier was an “invite” to a supposed satanic event, it gave a location and date and time to show up and participate (I kept the date and time non-specific enough so that we could’ve done the prank anytime without having to modify the flier text). Our ultimate goal was to actually stake out said location on the evening of the rumored event and see if anyone (would-be satan worshippers, cops, etc.) actually showed up. Unfortunately, we couldn’t make it and to this day have no idea if anything actually went down or anyone showed up. In my head, there was a huge turnout of police cruisers, vigilante youth ministers clad in white linens and wielding holy water, and high school senior wrestlers on a mission to defend their cheerleader girlfriends from evil satanists.

So, without further ado – pulled from the shoebox that is the paper archive of my middle through high school years: 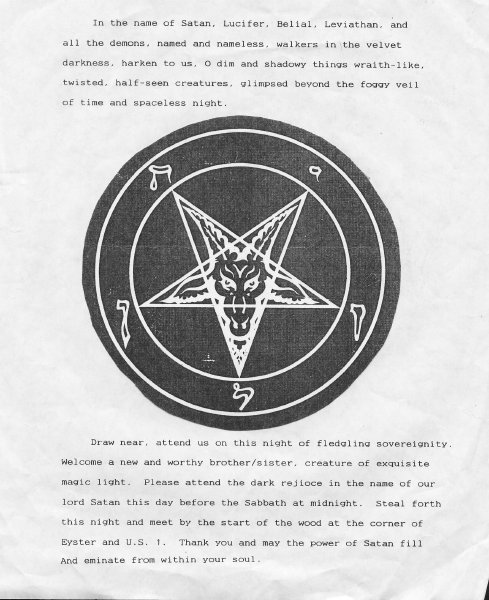 The text, for the vision impaired:

In the name of Satan, Lucifer, Belial, Leviathan, and all the demons, named and nameless, walkers in the velvet darkness, harken to us. O dim and shadowy things wraith-like, twisted, half-seen creatures, glimpsed beyond the foggy veil of time and spaceless night.

Draw near, attend us on this night of fledgling sovereignty. Welcome a new and worthy brother/sister, creature of exquisite magic light. Please attend the dark rejoice in the name of our lord Satan this day before the Sabbath at midnight. Steal forth this night and meet by the start of the wood at the corner of Eyster and US1. Thank you and may the power of Satan fill and emanate from within your soul.

The wording at the top is direct from the book, the bottom is mostly my own.

12 Replies to “the satanic flier”