Today was another interesting day in Taiwan. I suppose it goes without saying that I have some “shit I ate” updates. Well, I tried frog legs for the first time – and yeah, they totally taste like chicken. Chinese cuisine is very good, but also very odd to a westerner in some aspects. At lunch today, one of the courses consisted of half a papaya, which had been partly hollowed out, stuffed with mushrooms, topped with cheese, and baked. It may sound crazy, but it tasted great. Who would have known that papaya, mushrooms, and cheese could taste so good together. We also had some cold salad that I, at first, thought was comprised of tiny vegetables – but upon closer inspection realized was actually a bunch little dried fish. Kinda like tiny anchovies or something, heads and all. But man, I ate those little things up – they were awesome tasting. Funny that even the pizzas delivered from Pizza Hut come with shrimp and squid toppings.

There’s plenty of “normal” western food here, but I love trying the local fare. More often than not it’s awesome. The only thing I’ve found that I don’t really like are the broth-based soups which they tend to serve with a meal. Basically they simmer a whole bunch of different seafood in water, and then only serve the broth – sometimes with a couple sprigs of grass on top. So essentially what you’re eating is warm fish-water. I decidedly don’t dig this. Let’s see, I also tried something called “mantis prawns,” some kind of fierce piranha-looking fish, and even what the Taiwanese call “stinky ‘toh.'” Stinky “toh” is what they call stinky tofu (I took some spelling license on the word “toh” and just wrote it like it sounds). Oh man, they told me about stinky toh last time I was here, when while wandering through the night market I asked: “What is that stinky smell!?” Turns out it’s just really old tofu that’s either fried or boiled. I thought maybe it only smelled bad, but it really tastes like it smells – stinky. It’s like the smell is stuck in my mouth and I can’t get it out. Ugh. 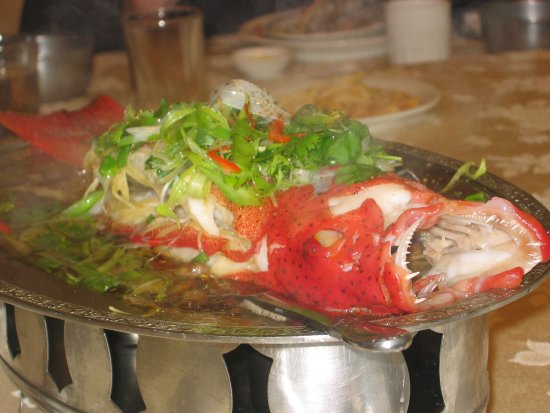 Looks scary, but was mad tasty.

During lunch they serve several different kinds of tea, and they usually bring out ornate little teapots and cups for each person. You also get a dish of warm tea to rinse your fingers in after a pungent seafood meal that is eaten with the hands. Today, I was checking out the little teapot that the after-meal green tea was served in. One of the Chinese-speakers with us explained that the characters on the pot were the names of the “four most beautiful Chinese women.” Once he saw that I was interested, he explained more – with all the other native Taiwanese in the room helping to explain. Seems that in school, as part of history, they are taught about the four most beautiful Chinese women. They can all name each woman. It’s hearing about and reading about things like this that fascinate me when I’m here. Even the news is so much different, there are stories about how certain political candidates will probably not get elected because it’s not a compatible year for them, or the particular god of something is unhappy with them. Fortune tellers are everywhere and much stock is placed in what Americans would call superstition and hocus-pocus.

Boss-man asked me today if I’d be willing to extend my trip for a few days and head to Shanghai after leaving Taiwan. While I wouldn’t mind, and I do really want to see Shanghai – I miss home and mostly Sharaun. Also I think we have a show (Notwist) shortly after I was supposed to return this week which an extension may cause me to miss. Anyway, it’s all subject to management approval – so there’s no reason to worry too much at this point I suppose. If I go I go.

I’ve been picking up more and more bits of Mandarin. I can do some rough counting now, mostly “shopping” math and bargaining. I can count to ten which is pretty much all I need to recognize most numbers. I can recognize certain phrases like “no problem,” and “that one,” “over there,” etc. I’m also pretty decent at piecing together a conversation from tone or a word or two I understand. It’s a really cool language, and I think I’d really like to learn to speak it. Man would it be a great skill to have for work, not only something fun to learn. If I could be around it as much as I am daily here, I think I could pick up on basic conversational speech fairly quick.

OK I am totally dead tired, as it’s midnight here and 8am my time US. Dave out.

2 Replies to “the smell is stuck in my mouth”